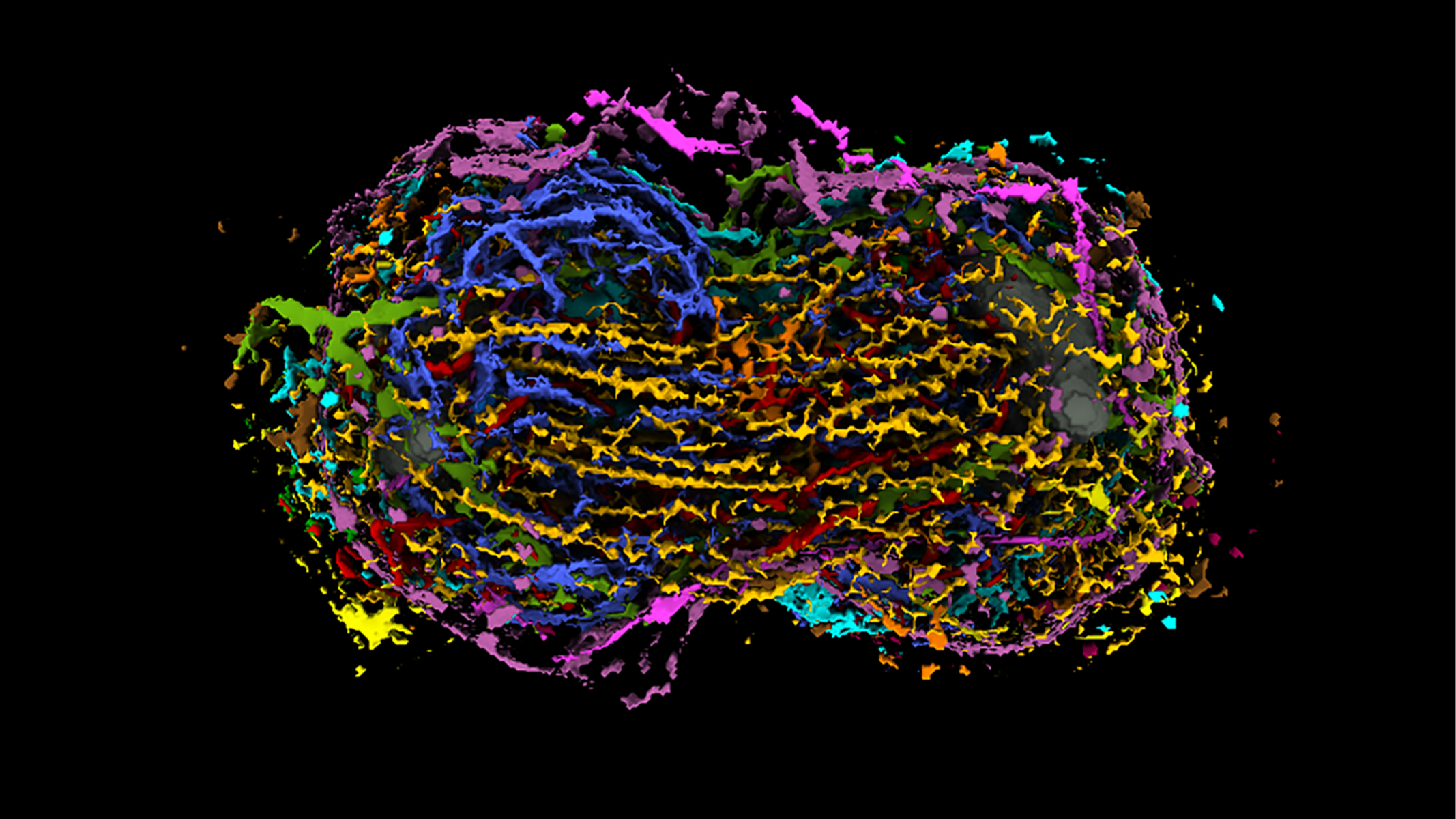 The data-driven model sheds new light on mitosis, a critical process for human cells and a pivotal driver of cancer.
The Allen Institute today released the Integrated Mitotic Stem Cell, a data-driven model and visualization tool that captures — for the first time — a holistic view of human cell division. By enabling a deeper understanding of how healthy human cells divide, a process known as mitosis, the model will further basic biology research as well as studies of cancer, a disease that often results from cell division gone awry.
“This is the first time anyone has seen all the major parts of the cell together during mitosis,” said Rick Horwitz, Ph.D., Executive Director of the Allen Institute for Cell Science, a division of the Allen Institute. “Visualization of the data is critical. Once you see this process as a complete picture, you can start to uncover new, unexpected relationships and ask and answer completely new questions about cell division. It will also serve as a much-needed baseline of how normal human cells divide for comparison with cancer cells.”

Cell division is integral to humanity and all living things. It’s how we grow from one fertilized egg into the tens of trillions of cells that make up our adult bodies, why we have specialized cells that form our organs, and how we repair wounds.

To divide, each cell must replicate its chromosomes, and then segregate the chromosomes equally into two daughter cells, properly partitioning the rest of the cell’s internal structures as well. It’s a tightly choreographed cellular dance that involves multiple players working together, with exquisite timing and multiple quality-control checkpoints.

That precise choreography is essential to our health: Tumors can form when a cell fails to divide correctly, leaving one daughter cell with too many chromosomes and one with too few.

“Mitosis is pivotal for cancer and cancer cells. To date, research on mitosis and cancer has focused mainly on chromosomes, but very few things in a cell work in isolation,” said Tom Misteli, Ph.D., Director of the National Cancer Institute’s Center for Cancer Research and a member of one of the Allen Institute for Cell Science’s Scientific Advisory Councils. “This new tool brings it all together, allowing researchers to connect the dots between different parts of the cell. We haven’t had that until now.”
The Integrated Mitotic Stem Cell captures the assembly of 15 different key cellular structures as they change shape and duplicate or disappear and reassemble in human stem cells as those cells go through five stages of cell division. The tool was generated using images of 75 representative cells taken from the nearly 40,000 images available in the Allen Cell Collection: a catalog of live human stem cell lines, carefully gene-edited by Allen Institute scientists to highlight different structures with glowing fluorescent tags.

Users can see and rotate a 3D view of any or all 15 structures during cell division, using two new viewers to explore a computational model developed from overlaying the 75 mitotic cell images. They can also delve deeper into the data used to generate the model, measurements taken on those data with plotting tools, and a collection of 2,000 additional images of dividing stem cells.

“Biologists have been looking at different images of cells and envisioning the relationships between them for decades, but to make precise comparisons, we can’t just hope that everyone’s mental model of a cell is the same,” said Graham Johnson, Ph.D., Director of the Animated Cell team at the Allen Institute for Cell Science. “These visualizations allow us to directly look at many different structures at once by superimposing them in the same space. Now scientists can make and discuss more concrete, more accurate comparisons.”

There appears to be a “trigger point” in a stage of mitosis known as early prometaphase, where many of the 15 cellular structures undergo dramatic transformations at the same stage.
The organization of the structures in the cell is the least varied and most highly stereotyped during metaphase, a critical stage of mitosis right before chromosomes begin to separate to the two daughter cells.
“These observations would not be possible without an integrated view of mitosis, but they’re also just the beginning of what can be uncovered,” said Susanne Rafelski, Ph.D., Director of Assay Development at the Allen Institute for Cell Science. “We hope that other researchers will find new surprises from these data that will advance our understanding of how our cells work.”