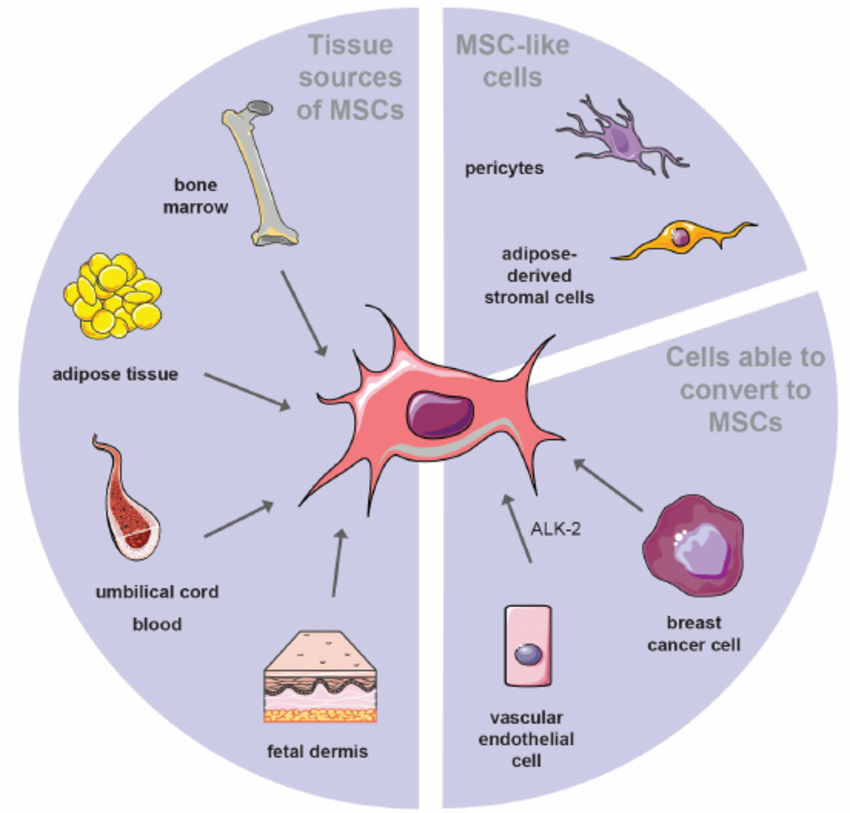 Bone marrow vs. adipose MSCs
There is an ongoing debate among stem cell therapy proponents about what the best source of cells is. There are, as it happens, many from which to choose. Mesenchymal stem cells are so named, because they originate in the “mesenchyme”, a layer that forms in the developing organism that goes on to comprise the bone, cartilage, muscle and fat. Each of these tissues is a source of MSCs in the adult organism, as is umbilical cord blood and tissue. Leaving aside umbilical sources, since they’re only available just after birth, the only sources of cells that are used in clinical settings are adipose tissue (fat) and bone marrow. The reason for this is because of the abundance of these tissues in body along with their ease of extraction. One can’t easily extract muscle or connective tissue for obvious reasons. Among the adipose and bone marrow cells, each has their proponents and detractors. There are remarkably few studies that compare the two cell sources directly, so an apples-to-apples comparison is difficult. However, when one looks closer at the totality of extant studies, it is difficult to understand why a controversy exists. Bone marrow is an unequivocally better source for MSCs. I outline my reasoning for this below based on three components: clinical and preclinical disease studies; basic biology; and the regulatory environment.

Clinical and Preclinical Studies
Those who make the argument for adipose stem cells seem to be unaware of the disparity between the depths of study between the two populations. Whether adipose MSCs are efficacious at treating a myriad of diverse diseases is in many ways unsettled; that bone marrow MSCs are is essentially settled science. We can look, for example, at the number of studies performed in a given disease that use bone marrow or adipose derived MSCs. My expertise is in treatment of stroke with MSCs. Searching Pubmed.gov for the terms “bone marrow mesenchymal stem cell stroke” returns 205 results (as of March 22, 2016, excluding review articles). Substituting “adipose” for “bone marrow” returns 27 results, a ratio of 7.6:1. Applying the same terms to myocardial infarction (heart attack) yields a result of 474 bone marrow studies to 67 adipose, yielding a similar ratio of 7.1:1. Multiple sclerosis has a more equitable ratio of around 3, but the general trend holds (with the caveat that the totals are far lower, since MS has come under study with stem cells only more recently). For all studies, bone marrow outranks adipose 12,980 to 3,360.

When we refine our searches to only include clinical trials, the contrast gets even starker. There have only been a small handful of clinical trial results reported for adipose cell based studies. Study designs have been registered for a few trials, but the only one that appears to have advanced past phase I (safety phase) is a trial for treating Crohn’s disease associated fistula. On the other hand, dozens of trial results in many diseases, including heart attack, stroke, ALS, type I diabetes, and others, have been posted using bone marrow MSCs. Many, though not all, of these studies have delivered positive results, and it is almost assured that more and more studies will be reported in the next several years.

​The above comparison is not a critique of the effectiveness of one cell type over the other, but it is evidence that bone marrow MSCs are more fully trusted by the MSC community. Let’s now talk about the differences in biofunction between them.

Biology
There are relatively few studies that compare bone marrow and adipose tissue MSCs in the same study. Therefore, direct evidence that one cell type is more effective in this or that disease is hard to come by. There have been a few, and they have offered mixed results. If one were to perform an internet search for adipose vs. bone marrow MSCs, one would discover very high in the rankings a press release that explicitly states, “Stem cells from fat outperform those from bone marrow in fighting disease”, and one could be forgiven for stopping there. I should chastise Stem Cellsfor publishing such nonsense, which beside from being untrue, is dangerous to patients trying to understand what might be best for themselves. The study cited in the headline was very typical of the types of study that compare the cells directly. Namely, the entire study was performed in vitro. This means that the scientists didn’t treat human disease, nor did they even use an animal model of disease. Rather, they grew cells in a culture dish and measured certain proteins secreted by the different MSCs, as well as the effect those proteins had on other cultured cells (immune cells in this case). They concluded that adipose MSCs were more immune repressive then bone marrow MSCs, because of the effects of adipose cells on cultured immune cells. But of course an organism is far more complicated than this. So far as I can tell there has only been a single study that compared the immune effects of adipose and bone marrow MSCs directly in animals, and those authors reached the exact opposite conclusion! Still another study concluded that bone marrow MSCs are better able to treat colitis associated neuropathy. Several other studies have not been able to detect a difference in the cell types, concluding that both are effective at treating several diseases. So the data appear to be ambiguous at best, but likely in favor of bone marrow MSCs.

Certainly it is utterly impossible, given the data that now exist, to claim that adipose MSCs are somehow more capable of treating disease than bone marrow MSCs. A further consideration here is how, exactly, MSCs function in the body. That MSCs are effective at treating many diseases is fairly non-controversial at this point, but the way in which they operate is still a matter of considerable debate. I have performed studies in animals that have had strokes where we track the cells after injection. I and others had always presumed that to treat brain disease the cells need to go to the brain. This is a logical hypothesis, and has become somewhat dogmatic in the community. However, when I actuallylooked at the cells post mortem, I found something pretty remarkable. Only about 0.5% of the cells we injected were detectable in the brain. Some were filtered by the liver and spleen, as one might expect with anything injected intravenously, but surprisingly (or perhaps not so after more careful consideration), the majority of cells resettled in the bone marrow! That’s right, the most mundane thing that could have happened actually did: bone marrow cells honed to the bone marrow. And the animals recovered well. It is not a big stretch to imagine that a similar thing is occurring with adipose MSCs. The difference is that the bone marrow is the seat of your life blood (literally—it gives rise to the immune system), whereas fatty tissue is inherently pro-inflammatory. It is somewhat unsurprising, given this reality, that bone marrow MSCs would be better positioned to promote growth and inhibit the inflammatory response, which can be a barrier to recovery in the long term for many injuries.

One last note about bone marrow is that when MSCs are collected, two other essential cell populations are also collected that are absent in adipose MSCs: endothelial progenitor cells and hematopoietic stem cells. Endothelial cells are the building blocks of blood vessels, and hematopoietic stem cells are what produce all the different types of blood cells in your body. These two types of cells also degrade as you age, and if collected and frozen, we can exploit having a young version of these cells as well in old age. This isn’t directly related to bone marrow vs. adipose MSCs, but collecting bone marrow has this additional, non-trivial benefit that we should not neglect.

The regulatory environment
The head start bone marrow MSCs have over adipose tissue MSCs in terms of research, combined with the fact that in head-to-head animal model comparisons favor bone marrow as a source, lead to the inevitable conclusion that the FDA is going to have a far easier time approving bone marrow MSCs for use than they are adipose cells. This should be self-evident to anyone paying attention, yet there are many people peddling just the opposite advice. I believe that the main reason for this is that many people have entrenched financial incentives. (Bio Banking Solutions does not. Of course we have a financial incentive to store cells, but the source is a matter of choice for us.)

The most often cited reasons I hear favoring adipose MSCs are 1) they are more abundant, and 2) they are easier to extract. First, yes it seems to be consensus that there are more cells per unit volume in fat. I consider that point to be moot, since the cells need to be expanded in culture to get the greatest effect anyhow. The best that adipose would save is that you would need fewer doublings to achieve the same number of cells. This would reduce the time in culture (assuming equal growth rates) and mitigate the already minimal risk of DNA damage that happens from time to time in culture. This is a very low risk event, however, and there have never been any adverse side effects from culture noted in any animal or human study. And to the second point, it is far from clear that adipose cells are easier to extract. Collecting bone marrow requires a simple aspiration from the iliac crest which is minimally invasive and produces very little pain. Collecting fat requires a liposuction, which is far from pain free, and is at least as invasive as a needle aspiration of bone marrow. Furthermore, the time to isolate cells after collection is hours for fat tissue, and minutes for bone marrow, making the office visit an all day affair for one, and a lunch break procedure for the other. This should not be an issue for storage of adipose MSCs alone. But is certainly an inconvenient factor for anyone hoping to have a same-day procedure.

In summation, when we look at both sources with respect to clinical and preclinical disease study results, basic biology, and the regulatory landscape as we set out to do, we find the reasoning for storing bone marrow MSCs unquestionably more compelling. The prime advantage of adipose MSCs a perceptual one. Many people perceive fat as being easier to extract with less pain than bone marrow. Reputations have been staked on this, but it simply does not pass the reality test.