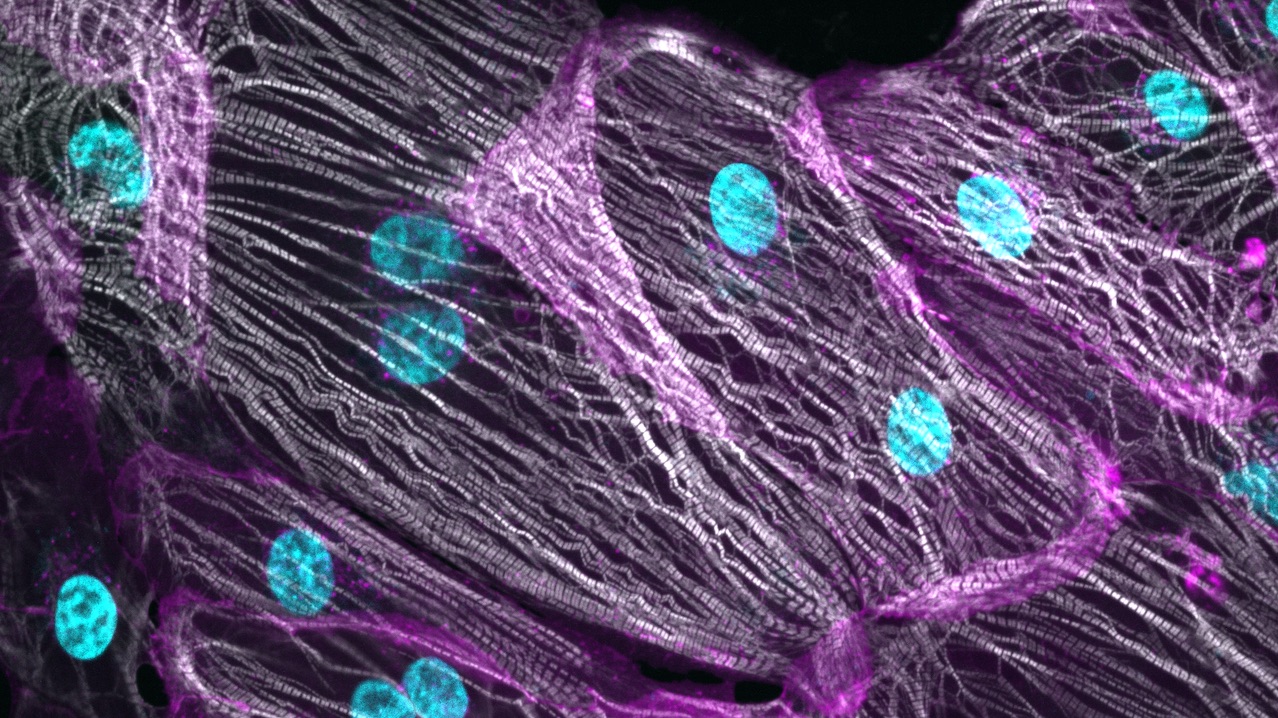 Allen Institute for Cell Science researchers have developed a new technique that will enable better understanding of human heart muscle cells. The method, described in a study published April 4 in the journal Stem Cell Reports, lays the groundwork for possible future studies of genetic cardiac defects and provides a key marker that could benefit cardiac regenerative medicine research.

The method, known as “silent gene editing,” allows researchers to label genes that are silent, or switched off, in human induced pluripotent stem cells, or hiPS cells, but active in differentiated cells derived from them. This strategy addresses a challenge in the stem cell field, namely, labeling something that’s unseen. To accomplish this silent gene editing, the researchers couple a fluorescent tag specific to the silent gene with a second fluorescent label that will light up in the undifferentiated hiPS cells, allowing them to identify cells in which the gene editing has worked. Once identified, that second fluorescent tag is removed, leaving the label specific to the silent gene.

The researchers used the method to add fluorescent tags to genes that are silent in hiPS cells but switched on during differentiation into heart muscle cells, or cardiomyocytes, labeling five different pieces of one cardiomyocyte structure. That structure, known as a sarcomere, enables muscle cells to contract and relax, the key attribute of cardiomyocytes that allows our hearts to beat in rhythm.

Now that this structure, which is not present in the hiPS cells, has been precisely labeled in these five different gene-edited cell lines, researchers can use the cells to study what goes wrong in cardiac disease, said Brock Roberts, Ph.D., a scientist at the Allen Institute for Cell Science, a division of the Allen Institute, and lead author on the study.

“Now we can better understand what’s going on by introducing disease-related mutations into these cell lines,” Roberts said.

Familial hypertrophic cardiomyopathy, an inherited disorder where the walls of the heart are thicker than usual, is the most common genetic heart disease in the U.S. Some types of these cardiomyopathies can be traced to mutations in sarcomere proteins.

One of those five lines labels a protein known as myosin light chain 2, which is made by a gene that switches on relatively late as cells mature from undifferentiated hiPS cells to cardiomyocytes. That label could prove useful in the field of regenerative medicine, Roberts said. Studying heart cells in a petri dish can yield valuable information about heart health and disease, but the cells typically stay relatively immature, a stumbling block to the goal of generating lab-grown hearts that could be given to patients in need of a transplant. Researchers in the field of regenerative medicine could use this cell line to signal when the heart cells are approaching maturity.The technique could also be used to label structures specialized for other cell types, such as neurons, skin cells or liver cells.The heart muscle cell lines, like all Allen Institute for Cell Science cell lines, are available to the research community through the Allen Cell Collection.Other co-authors on the study include Joy Arakaki, Kaytlyn Gerbin, Haseeb Malik, Angelique Nelson, Melissa Hendershott, Caroline Hookway, Susan Ludmann, Irina Mueller, Ruian Yang, Susanne Rafelski and Ruwanthi Gunawardane, all of the Allen Institute for Cell Science.